The Skunk was developed by the Technological Development Department of the Israel Police, in collaboration with Odortec LTD. It is manufactured by Odortec, with two supporting companies, Man and Beit-Alfa Technologies.

“Skunk” is a malodorant, non-lethal weapon used for crowd control. The liquid’s strong odor is marketed as an improvement over other crowd control weapons (CCWs) such as rubber bullets and tear gas. Skunk” is dispersed as a form of yellow mist, fired from a water cannon, which leaves a powerful odor similar to rot or sewage on whatever it touches. Skunk is also sold in handheld canisters and in grenades which can be thrown or fired as projectiles.

The material used is said to be an organic and non-toxic blend of baking powder, yeast, and other ingredients.[1]

In 2017 the Israeli Newspaper reported: Skunk is liable to cause physical harm, such as intense nausea, vomiting and skin rashes, in addition to any injury resulting from the powerful force of the spray. Examinations by police and army medical teams in the past also indicated that the excessive coughing caused by exposure can result in suffocation”.[4] 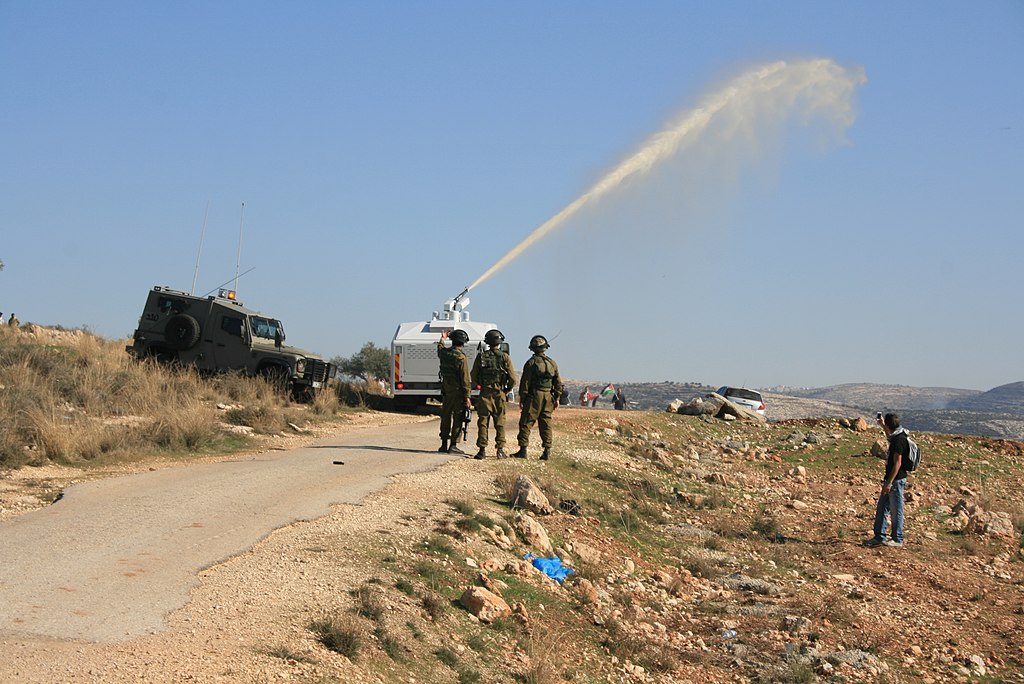 Skunk used against Palestinian protester in the village Bil’in in the occupied territories, 2011.

Skunk is used by the Israeli military and police forces in Israel and Palastinian occupied territories.

Skunk was first reported to be used for crowd control in August 2008 in the Palestinian village of Ni’lin where daily protests had been taking place in response to the construction of a security barrier.[5] Spraying the liquid has developed into one of the preferred measures adopted by the IDF to meet the challenge of civil disobedience and demonstrations by Palestinians. The tactic was devised to tamp down organized civilian protests in the West Bank.[6] It has been used regularly against the villagers of Bil’in, Ni’lin, Kafr Qaddum, and Nabi Salih, where weekly protests against the occupation are practiced.[7]  The Skunk was also used in a demonstration against the closing of Shuhada Street in Hebron, which took place in February 2012.[8] The skunk was massively used against Palestinian protesters during protests in Sheikh Jarrah and at the Damascus Gate in east-Jerusalem in 2021.

Amnesty International, B’Tselem and the Association for Civil Rights in Israel have been critical of the IDF’s use of the product. Concerns have included accusations of indiscriminate use against people, homes, and businesses not involved in demonstrations.[9] The IDF has also been accused of deployment in a manner described as punitive.[10][11][12] Critics have said that the IDF sprays Palestinian houses after protests as a form of collective punishment.[13]

In 2017 Israeli forces began using Skunk against Ultra-Orthodox Jewish protesters and against protesters[14] of the Israeli Ethopian community.[15]

A non-lethal, high pressure water stream restraining system on anti-riot vehicles produced by  Beit Alfa Technologies . The system was originally designed during the first Intifada to be used to suppress Palestinian protests in less lethal means due to criticism on Israel for use of rubber coated bullets.

In 1989 the system was already used against protesters in Chile. The system has been exported to numerous countries since, including Apartheid South Africa in its late days. According to Amnesty international it was used by the Burundi government against protestors in 2015.

Skunk used against Palestinian protester in the village Bil’in in the occupied territories, 2011.

Used by Police and Army forces for crowd control. Vehicles developed by the company are used to carry “the Skunk”, a scent-based weapon that is used by Israeli forces against Palestinian protestors in the West Bank and East Jerusalem. “Skunk” was also used against Ethiopian Jews and Haredic Jews in protests.