The Shaldag-class patrol boat is a small but fast class of patrol boats developed by Israeli Shipyards for the Israeli Navy and launched in 1989, it has since seen service with several other navies.

The vessels are armed with a Typhoon Weapon station, mounting a Bushmaster M242 and electro-optics systems. They are equipped with foredeck and aftdeck rings for Oerlikon 20 mm cannon and a single gun mount.

Shaldag class patrol boats were exported among others to Azerbaijan, Equatorial Guinea, Senegal and Sri Lanka.

In 2020, the Philippines acquired eight Shaldag-class Mark V patrol boats from Israeli Shipyards. The first three boats are being expected to be delivered in the beginning of 2022.[2]

At least five Shaldag MK-III are in use by Israeli Navy since 2005. They are including MTU motors with KaMeWa pumps from Sweden.

Two Shaldag vessels are operating at the maritime Gaza border at any given time.[3]

In 2005, an Israeli Shaldag vessel shot a fisher-boat near the Gaza coast, killing a 22-year old fisherman.[4] At least 10 more incidents like that happened, involving Shaldag boats.[5]

Shaldag vessels were used in the second Lebanon war, at operations “Pillar of Defense” in 2012 and in operation “Protective Edge” in 2014 in Gaza.

Shaldag vessels were used in the 2021 war in Gaza, called by Israel “Operation Guardian of the Walls”.[6] 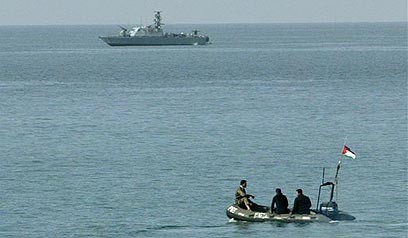 Policemen searching the body of a Palestinian fisherman shot by an Israeli Shaldag vessel near Gaza in 2005. (Photo:AP)

The Harpy is a loitering munition, or “suicide drone” produced by Israel Aerospace Industries (IAI). The Harpy is designed to attack radar systems and carries a high explosive warhead. In 2004, when Harpys sold to China in 1995 were to be upgraded in Israel in 2004, the USA demanded Israel seize them, after they were spotted in a Chinese military drill in 2002, though Israel claimed the Harpys had no US components, and therefor the US had no claim on them. Eventually Israel didn’t upgrade the drones, but did return them to China.

The Harop, first sold in 2005 to Turkey, is a later development of the Harpy. It can operate both fully autonomously, or be manually operated in its human-in-the-loop mode. If a target is not engaged, the drone can return and land itself back at base. In both 2016 and 2020, the Harop was by Azerbaijan in the Nagorno-Karabakh conflict.

While the Harop is in operational use by the Israeli Navy, we do not know of any use of it in combat by Israel to date.

Israel exports arms and military equipment to around 130 countries worldwide. Currently the database contains 48 countries and will continue to be updated regularly.

The American Friends Service Committee (AFSC) does not assume any legal liability or responsibility for outdated, incorrect, or incomplete information included on this website.